I’m planning on conducting a study on the spread of governmental propaganda, fake news, and rise of xenophobic hatred among users of social media platforms. As in my country it is still Facebook which is the most popular such site across generations, that’s the one I’m considering to choose.

My plan is to set up a couple hundreds of bots. The government of my country has gradually shifted towards strong populism, xenophobia, and authoritarianism in recent years, thus pro-governmental groups and Facebook pages would surely be an ideal start. The accounts would seem like a real person (some with photos of real individuals, preferably using royalty-free online image sources) but most, obviously, would just have some generic profile picture.

The point is to use marginalized opposition, as well as international news sites as the source of information to protest against the government’s use of propaganda, hence raising awareness to the dangers of public incitement against a group of people (be it either members of an ethnic, religious, sexual minority, intellectuals, critiques, pro-opposition figures or any other group).

A script would be in charge of regularly logging in each of these accounts and randomly selecting one account each day to be the one hinting the comments across governmental platforms, while managing all the rest to like and share the thoughts of the daily selected account.

My question is: Is there a concern about Facebook detecting that a huge number of accounts are being managed from a single computer, and shutting the whole down? Would a VPN service be a solution, given that the script would only use a specific IP address to log in at most a couple of accounts and then change the IP to a different one? Or, instead of the hassle and financial consequences of having to use multiple VPNs, would it be more advisable to use the Tor browser and access the Facebook accounts via that?

Are there any reports on Facebook lowering a page’s rank if it’s suspected of copyright infringement (or other conditions trespasses)?

IIRC, you cannot use yandex email to register a new account with Facebook. But I tried signing up using a free email account from zohomail and the new account was automatically disabled. Now I requested a verification code which I sent to a virtual phone number as I never use my real cell # to register with sites but the text message never showed up. I’ve also heard that accounts registered with gmx mail are often automatically flagged.

Whether I need new email or mobile no. or both.

Note: I tried to upload ID proof but it says that the decision of account disabled will not change.

Right now sometimes people hold a drawing on Facebook (such as an item in the game Animal Crossing), with other users typing 1, 2, 3 and so forth to identify themselves, and the original poster could use a random number generator to get a number such as 25 to decide who the winner is.

But it can be chaotic when people happen to type in the same number at the same time, or when someone is typing 25 and the other person is still typing in 24. Also, some people then skip ahead, and type 28, and can make it more messy. Some people type 26, but by “replying to another user”, so now there are two 26… and is not good either.

If the users are not asked to type in a number, but to type in “join” to join the drawing, it also is very difficult when the random number is 253, and now the OP has to count who user number 253 is.

Does Facebook or some 3rd party mechanism have a way to “choose a person” out of many? If Facebook has such a feature, then it should work in a way that is much more robust.

Fb allows to create only 1 pixel per account. I am using this pixel on multiple websites.

I found out that the pixel that is in many websites is in my “personal account”: 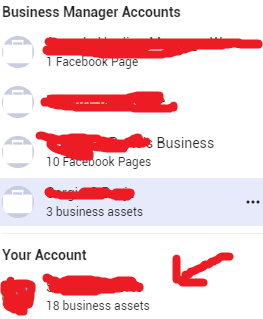 When I am in some of my businesses https://business.facebook.com/select/ I see the pixels of specific websites that I created a pixel for. All those pixels in my businesses are new pixels.

The OLD pixel is in my personal account. I have no idea what to do.
Should I stop uxing the pixels of the personal account and create a new pixel in the business accounts for each website and start tracking new data from scratch?

That would be very painful

I can’t post on a group I created and admin! Fb is limiting my posts!

I post couple times daily to keep my time line light and now I can’t anymore.this is strange! I tried going as myself then as the fan page but I’m unable to post either way!
Has anyone encountered this issue?
What do I do? HELP please!

I have SPA built with angular. I am settings open graph tags via angular meta service in js when rest api request with data is completed – https://angular.io/api/platform-browser/Meta
I do not use ssr

Maybe the reason is that Facebook crawler is not able to execute js. I have not found that explicitly stated in Facebook docs. If it is the reason, how to overcome it?

I suddenly am having PROBLEMS with the icon for “photos” under comments ON MY Facebook personal PAGE – where in the past, it has worked. The “icon” for photos DOES NOT ENGAGE when I click on it…and in the past, there were no problems. I have been in and out of Facebook “jail” quit a bit these past few months for no good reasons (i.e.: typing too fast, sharing to multiple groups that I am a member of, viewpoint discrimination, etc.) HOW CAN I FIX THIS? Is Facebook somehow “disabling” the icon? The GIF, and “post an emoji” icons all work OK; it’s just the “photos” icon that doesn’t work when I click on it…and it doesn’t matter if I double-or-single-click the icon. I RE-ITERATE, HOW CAN I FIX THIS? btw…I spent 6 hours today going through “my account” and making sure all the settings I could find were turned “on”. HELP…

I was the sole admin of a Facebook Messenger chat, left the chat, and now no one can add me back because no one else is an admin. When someone tries it says new people need to be approved by admins, but there are no admins listed.

Can anyone promote themselves to be the new admin or is there another workaround?